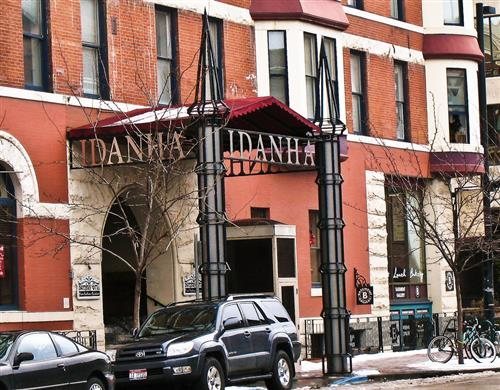 Located in Downtown Boise, this hotel was built in 1900 and was used to house travelers that were getting off of the strain stub line from Nampa. It now is modern apartments and was renovated, which is when construction workers reported some strange activity. Gunned down at the hotel, a bellman's ghost has been said to move the elevator up and down. Some have also spotted his ghost peering around corners in the building. Other eerie reports here include lights turning on and off by themselves, moaning sounds coming from certain levels of the building and a misty grey apparition has been spotted as well. A woman who was murdered and buried in the hotel's basement is also known to linger herer in spirit, mostly in the lower levels of the building. There is also an aggressive entity who is said to haunt the third and fourth floors, known to pull guests out of their beds.

Disclaimer: Idaho Haunted Houses does not endorse or support trespassing to visit real haunts. Before you visit ANY local real haunt, make sure to acquire the appropriate permits and/or permissions, and be respectful of privately owned properties. Countless Haunt Hunters have been arrested, ticketed, and reprimanded by the authorities for trespassing. To avoid this, be sure to get in touch with the property owners before visiting a haunt, and respect their hours of operation, local regulations, and rules for visiting at all times. Happy haunting!
All information on this page was submitted to Idaho Haunted Houses and was believed to be accurate at the time it was posted. Please report any inaccuracies here.